Virtual reality is one of the hottest things in the tech world, and it’s only getting hotter. Virtual Reality headsets have been around for quite a while now, but they have never really gotten their foothold into the mainstream yet.

It has been mainstream news for some time now and that has led to a lot of increased interest, but until now the technology hasn’t had a product that the mainstream audience can purchase. That has finally changed and VR is due to go mainstream in a very big way in the next few years, so it makes sense to take a look and see what these VR headsets are all about.

In the realm of technology, virtual reality will be the next big thing. With its near-perfect blend of technology and entertainment, VR can change lives. But before you get too excited about the prospect of strapping a headset to your face, it’s important to understand the technology behind it. This blog post will cover everything you need to know about VR headsets and how they work.

What is VR (Virtual reality)

Virtual reality (VR) is a realistic, computer-generated simulation of a three-dimensional environment, created using interactive software and hardware, and experienced or controlled by the movement of the body.  It simulates a range of interesting sensations, including sight, hearing, touch, smell, and taste.

Virtual reality (VR) is a term used to interact within a seemingly real or physical way by a person using special electronic equipment, such as a helmet with a screen inside or gloves fitted with sensors. It is also referred to as VR and 360-degree video.

Virtual reality is a term that has been thrown around a lot recently, especially with the release of virtual reality headsets like the HTC Vive and Oculus Rift. But what is VR? VR is a simulated environment that a user can interact with through their senses. VR has been used in a lot of different fields, but most recently it has been used for gaming as well as in some business settings and for military training. The first use of virtual reality was in the ’50s when Morton Heilig created the Sensorama. The Sensorama was a device that allowed users to experience movies like never before. It simulated a motorcycle ride, a boat ride, and even an airplane ride. The Sensorama was considered the first form of virtual reality.

How does a VR headset work?

The technology behind a virtual reality headset is pretty complex. The headset itself is made up of a plastic casing with a series of adjustable straps and lenses within it. It is attached to a powerful computer that is loaded with a VR-specific operating system and graphics card. The headset is then connected to the computer via a high-speed data cable. The headset uses two lenses to visually display the image being sent to the computer. The lenses are placed close to the eyes of the user, who then looks through the lenses to view the virtual world. The lenses are used to magnify the images being sent to the computer and then reflect those images to the user’s eyes.

Where can you use VR headsets?

Virtual reality headsets are fun and can be used in a variety of ways. For example, you can use VR headsets for experiencing nature up close, you can watch the latest movies, experience life as a superhero, play video games, and Experiment with a new skill like playing a musical instrument. The possibilities are endless. Continue reading to learn more about some of the best uses of VR headsets.

What is the future of VR?

This year, virtual reality (VR) has taken the world by storm. Millions of people have already been exposed to this new technology through their smartphones or their console or computer, and there are even more new headsets coming out shortly. But what is this future of virtual reality? Well, it’s hard to say for certain, but a lot of people think that it’s the next big thing in gaming and that gaming will be the primary driving force behind the growth of the virtual reality market. But it’s not just gaming. There are many other uses for virtual reality such as medical, military, and education.

VR headsets vs AR (Augmented Reality) Virtual Reality (VR) headsets and Augmented Reality (AR) have been the talk of the town for quite a while now. Both have captured the attention of the masses and the tech geeks.

Augmented reality (AR) is a technology that overlays digital information in the real world, whereas virtual reality (VR) immerses users in a digital world. The two technologies are becoming increasingly popular and are used in a variety of industries, but many people are still confused about the difference between the two.

We have heard and read about how these are the next big things to come, how these will revolutionize the way people interact digitally, how these are more relevant than the traditional desktop and laptop computers, and how these will change the way we live, travel and much more. Hence, it is a no-brainer to say that we are all hyped about the future of these technologies.

However, the question remains: which one is better? Which technology will emerge as the winner? Is it going to be a tie or are we going to have a clear winner, like in the case of iOS vs Android? So, let’s see which one of these is better and whether one will have a clear edge over the other or if they will co-exist with each other.

What are the Advantages and Disadvantages of VR headsets?

A lot of people are going to start to see a lot of the benefits that come from the use of virtual reality. As it becomes more and more mainstream, more and more people are going to start to see how it can be used in several ways. The biggest reason why virtual reality has been put on the back burner is that it’s not as accessible as other forms of technology. But that’s going to change too.

Since the dawn of the internet, tech advancements have made it easier for us to access information from the comfort of our own homes. Yet, the allure of going out and experiencing things, in the physical world, is just not the same anymore. For this reason, virtual reality headsets have been developed that create an ultra-realistic experience with the use of 360-degree videos and other technologies. 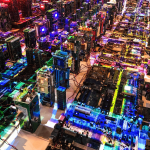 Power Electronics: 6 Things You Need To Know About GaN

Things to consider while buying a 75 inch TV