After winning 52 titles in the Scottish Premier League, you can say that no team can reach their level. Even if this is a great statistic besides winning 40 Scottish cups, they are still looking for their winnings in the Europa League. The Champions League is far from them even if they are playing qualifications each year.

After losing their qualification for the Champions League, they will focus more on Europa and the Conference League suits their strength more. There are many Europa League predictions, but a lot of transfers have happened, and many teams are coming with a whole new squad for the season.

Ange Postecouglou On the Lookout

The Celtic’s manager admitted that he was looking at the play style of young attacker Ladislav Almasi after the match against Banik Ostrava. The 23-year-old caused a lot of problems for Celtic, but they managed to win 4:2 after the amazing match from Giorgos.

These are only rumors about the transfers, but it’s a fact that Celtic is looking for new attackers after signing a back and a midfielder. They lost a few players this season, and with a squad of 30 players, it would be a problem if you don’t have a substitute for an attacker.

Alexandro Bernabei was their latest deal, and the manager said they will look for 1 or 2 more players for the season. This would be their 6th transfer this year, but it didn’t impact their budget much.

It’s hard to compare them with other teams in the league, so they need to look at the top leagues in Europe and learn from them. It’s hard to make Europa League predictions today, but after the transfers finish, it will be clear who made a better deal.

The 10-day training camp was done in Australia, and most of the squad is ready for the upcoming friendly matches. There are three matches they will be playing before the season starts. These are very important for Ange because he will need to figure out who will be playing in the starting 11.

With a great manager like Postecoglou, they will definitely be better than last season. Joe Hart is still a great goalkeeper, even if many people think that he lost a lot of confidence after leaving the English Premier League. But, the coaches say that he is willing to play and that he trains more than some players on the team.

Jullien was about to leave the club for Schalke before the training camp, but he’s still on the team, and he was given playing time during the rumors about the transfer. This means that the coaches believe in him and have already given him an armband against Viktoria.

Ange is not satisfied with the team even after winning a couple of titles this season. He said that their passing game needs to become better if they want to play in the Champions League.

They have the material to work with, but it seems like they didn’t have any luck in the qualifiers. They will probably be among the Europa League picks because they didn’t have success in CL in the past five years.

Josip Juranovic Will Stay on Parkhead

Josip is a very talented player that only played 1 season for Celtic, but there are already offers for him from some of the top clubs in the world, like Atletico Madrid. Even if Atletico is constantly playing in the Champions League, Josip said that he would love to feel the atmosphere while playing for Celtic.

He is currently worth a bit over $7 million, which isn’t expensive for Madrid, but he’s not willing to leave Scotland for now. He will be about for a few games considering that Croatia is playing the World Cup in Qatar. Ange will have his starting 11 players ready for the upcoming season, so it’s up to players to prove themselves. 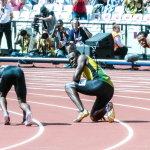 The World’s Fastest Man: Chronicling the Amazing Life and Career of Usain Bolt